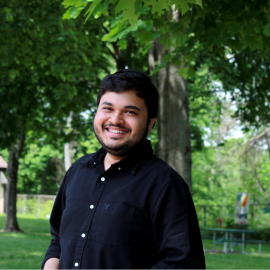 I am a DevOps engineer with strong Linux background and over 8 years of experience in developing and implementing software and networking infrastructure for large-scale deployments of on-prem, cloud and cyber physical systems.
Throughout my career, I have leveraged SRE principles and DevOps processes for administering, architecting and orchestrating the compute & storage systems and for building secure IoT platforms. Since most of my work involves scripting, be it for data analysis or orchestrating the infrastructure, I use Python as my weapon of choice.
In the past, I have also worked as an adjunct professor at NYU, teaching graduate students broad topics such as wireless sensor networks, Internet of Things and micro services architecture. I have also designed and implemented Urban Computing Skills Lab, an online class, for incoming graduate students for Masters in Urban Informatics.
I am also a researcher fueled by my passion to understand the working of the cities from a physical sciences point of view. I am actively involved with Urban Observatory and Sounds of New York City. I actively contribute to, and have published a few papers with my colleagues, in these two projects.

I received my Masters from NYU Tandon School of Engineering in Computer Systems and Networking where I designed Citysynth, a prototype infrastructure, that utilizes window mounted cellphones to continually capture images of New York City skyline and perform on-the-fly processing to provide deeper understanding about how the city works.
I consider myself to be a forever student, eager to build on my academic background and stay in tune with the latest technology through continued professional development.

Encrypting the web traffic is a standard practice today. It is used by almost everyone regardless of whether you are a Bank making sure your customers feel safe to use online services, an e-commerce website trying to gain the confidence of your customers or just another blog writer who wants to look cool with the nice green lock in the address bar.
Mohit Sharma
Last updated on Feb 13, 2022 7 min read

I love Jupyter notebooks! They are great for experimenting and playing around with the ideas. I always liked the idea of using a single web based application for writing code snippets, visualizations, creating presentations and even blogging!
Mohit Sharma
Last updated on Feb 13, 2022 3 min read tutorial, python

A 15 screen vizwall using a network of Raspberry Pi’s

Sonyc is a novel cyberphysical system that consists of a hybrid, distributed network of sensors deployed in the NYC that makes use of cutting-edge machine listening methods to constantly provide a rich description of their acoustic environment.

Masters Thesis on developing a cost efficient technique for performing persistent and synoptic observation of the lighting in city which can be used a proxy for understanding and improving the quality of life of people. This project aims to build an IoT infrastructure to further facilitate the research presented in Dynamics of Urban Lightscape on a larger and granular scale

Noise pollution is one of the topmost quality of life issues for urban residents in the United States. Continued exposure to high levels of noise has proven effects on health, including acute effects such as sleep disruption, and long-term effects such as hypertension, heart disease, and hearing loss. To investigate and ultimately aid in the mitigation of urban noise, a network of 55 sensor nodes has been deployed across New York City for over two years, collecting sound pressure level (SPL) and audio data. This network has cumulatively amassed over 75 years of calibrated, high-resolution SPL measurements and 35 years of audio data. In addition, high frequency telemetry data have been collected that provides an indication of a sensors’ health. These telemetry data were analyzed over an 18-month period across 31 of the sensors. It has been used to develop a prototype model for pre-failure detection which has the ability to identify sensors in a prefail state 69.1% of the time. The entire network infrastructure is outlined, including the operation of the sensors, followed by an analysis of its data yield and the development of the fault detection approach and the future system integration plans for this.

In this experiment we identify the lighting technologies being used in NYC using a Visible and Near Infrared hyperspectral (VNIR) imaging. The instrument is a scanning, single channel spectrograph that provides the spectral signatures in 872 different spectral channels between 0.4um and 1um. The spectra obtained from the instruments is then matched with those that have been tested in the laboratory by National Oceanic and Atmospheric Administration (NOAA)

Hypertemporal visible imaging of an urban lightscape can reveal the phase of the electrical grid granular to individual housing units. In contrast to in-situ monitoring or metering, this method offers broad, persistent, real-time, and non-permissive coverage through a single camera sited at an urban vantage point. Rapid changes in the phase of individual housing units signal changes in load (e.g., appliances turning on and off), while slower building- or neighborhood-level changes can indicate the health of distribution transformers.
We demonstrate the concept by observing the 120 Hz flicker of lights across a NYC skyline. A liquid crystal shutter driven at 119.75 Hz down-converts the flicker to 0.25 Hz, which is imaged at a 4 Hz cadence by an inexpensive CCD camera; the grid phase of each source is determined by analysis of its sinusoidal light curve over an imaging “burst” of some 25 seconds. Analysis of bursts taken at ∼ 15 minute cadence over several hours demonstrates both the stability and variation of phases of halogen, incandescent, and some fluorescent lights. Correlation of such results with ground-truth data will validate a method that could be applied to better monitor electricity consumption and distribution in both developed and developing cities.